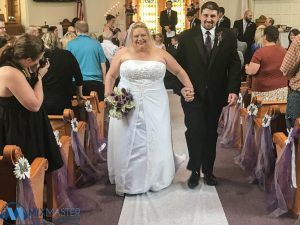 What do you do to make a fire hall wedding reception look over the top fabulous? Well you do what Jennifer did and add in some glitter’n’glam (pun intended). No but really The Clinton Township Firehall is already a pretty nice updated firehall but we just took it to the next level by adding in some purple uplighting and a customized monogram that really made it stand out. I’ve been helping plan Louis and Jennifer’s wedding for over a year! (that’s right folks people DO book that far in advance)…

Originally Jennifer booked me for the reception only that included the uplighting and customized monogram but when scrolling through facebook I read a status from Jenn that said. “Would anyone with a CD burner be willing to make me a cd with our wedding ceremony music?” and I then had to comment and say … ummm over here I can help!!! and honestly I’m so glad they had me help with the ceremony because it went off without a hitch and I didn’t have to burn a CD.

The ceremony would take place offsite at their church in Muncy. I went ahead and meant with the couple and pastor way in advance and went over all the details. I used the in house PA system however I used my own music and a lapel microphone for Louis our groom and if you know Louis you know he is soft spoken but not to worry as it picked him and Jennifer both up and everyone was able to hear the ceremony. My favorite part of the ceremony? the part where Jennifer walked down the aisle with her father. She had a roller made up that was handwritten on with the words “Dad, Of all the walks we’ve ever taken … I will remember this one forever Love Jen” now isn’t that just a tear jerker?

Now being that the ceremony was off-site I quickly had to run over to the reception hall as soon as the ceremony was over so I could have the music playing as guests would arrive to the hall. The best part is everything was setup the night before so I only had to cue up some songs on the deck and start to play. The venue was decorated with beautiful purple uplighting along with a customized monogram. For the reception Jennifer had recorded a special message for her father that was played back during their dance and she also had a special dance with her brother. Louis on the other hand wanted his dance with his mother to be short and simple and therefore we played a short version of “simple man”

For the cake cutting ceremony we did something a tad bit different. Jennifer used one of my ideas of “who wears the cake” where she had two jars (one for her and one for our groom) and people would put money into the jars and whomever had the most about of money would win … yet loose… win as in they had the most amount of money but loose because they were getting cake smashed in their face. Can you guess who had the most amount of money? Lets just say some 5’s and I believe a 20 was added to Louis’s jar so he got to wear the cake! Later in the night Jennifer also had me help her with a skit she wanted to do for her groom. She did a little dance to the song “Like a virgin” while having Louis tied up to the chair… now that I mention this, I think maybe I should invest in some handcuffs instead of rope.

All in all this was a wonderful wedding that went off well. Check out the photos and video below.