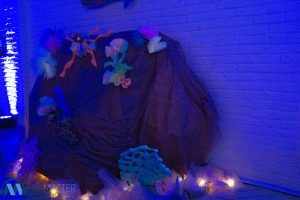 “Under the sea” that was the theme behind Columbia-Montour AVTS Prom. Honestly I had a blast working with this prom because of everything I came up with. The colors, The theming, it all went together nice and smooth.

When you think “under the sea” what do you think of? colors such as blue? maybe some water effects? well that’s exactly what I did. The committee told me they didn’t want any “Flashy type lights” and when they told me the theme I had suggested well rather than the dance floor lighting how about we paint the entire room in blue… with lights that is that would remain a solid blue color. I also was able to add in some H2o water ripple effect lights to give it more of that “under the sea” type theme. We had students dancing pretty much the whole night. I wasn’t able to get a lot of shots but of the ones I did check them out below.