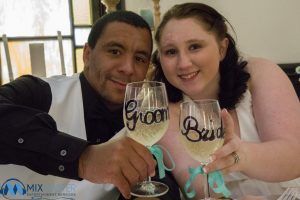 First of all… Let me start off by saying I’ve known Jerel since elementary school. We grew up together and knew each other pretty much our whole lives (a least childhood on up) When Jerel told me he was going to get married of course I was kinda shocked I mean who knew someone whom I hung out with was actually going to settle down and be married?

Now when Jerel told me he wanted me to be apart of the wedding but also wanted me to DJ I asked how? But he did it … well actually we did it. I’ll get to more of that in a moment but first let me rewind to the beginning when I started all the planning with Jerel & Cathleen. They wanted a truly laid back but unique out of the box type wedding. First it was going to be at one of the local fire halls then everything switched to the GAP fellowship church after Mass on a Sunday afternoon. They wanted the dancing on the clouds effect along with a customized monogram… and I delivered exactly that.

During the planning Jerel had called me up saying he wanted to do a video and have it play right before he walked in for the ceremony. He gave me the concept and wanted me to record it on his cell phone. Being that I’ve known him pretty much my entire life I told him NO! to scrap the idea because I would give him something much better than a cell phone quality video and not only that but my name would be on this (meaning I helped to produce it) So we meant up and took the concept to life… you can watch it below.

Now getting back to how I was going to be incorporated into this wedding. Jerel told me that myself as the DJ always introduce the wedding party and couple but he wanted me to be introduced. Wait… What?!?! that right he said I want to introduce you and I want music being played for each couple. So lucky I was able to set up a wireless connection to be able to control the music while Jerel “introduced me” it was truly a different experience as its not about me but about the couple … really! I was honored he wanted to spotlight myself.

For the wedding however I helped with ceremony sound, the introductions were awesome and not to mention the customized monogram and dancing the clouds truly added some awesomeness to this wedding. Check out the photos and video below.