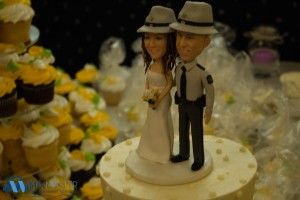 kicking things off to a good start with Kimberly & Joel’s Wedding which was our first wedding of 2016. I have so much more lined up and so many neat ideas… Some of which I used at their wedding. The wedding was held at The Lewisburg Hotel in Lewisburg, PA

When I first meant with our couple we discussed some options such as having a custom monogram. I think they picked a really neat design that I would project onto the wall during the reception. After the wedding I sent the gobo that was used to make the monogram to our couple for a keepsake.

During one of our meetings I mentioned that for our wedding party why don’t we introduce them rather than announcing them on into the room. I gave them some ideas in which they came up with some creativity on how to introduce the wedding party: such as knowing the best man and maid of honor for nearly 30 years and being like a brother and sister to our couple. I followed with a song for each couple as they walked in. We took it and added just that small touch of personalization.

Did I mention that for most of the night the dance floor was packed? and our guests were pretty outgoing and willing to have a good time. All in all a great start for the 2016 wedding season. I had a blast with this group. Thanks for having me.