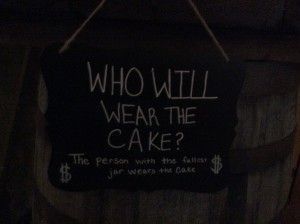 I love the rustic feeling that you get from Barn weddings. This place is such a good example of a rustic themed wedding: The Stone Barn Winery in Selinsgrove, PA. Despite the rain we had Kaleisha & Dakota was not going to let that ruin their wedding day… in fact they were super chill about it and basically shrugged it off like hey whatever.

When you learn not to stress out over the simple things that you do not have any control over you will have so much more fun and not be stressed. Today was a perfect example. We were able to easily move our ceremony that was suppose to take place outside to right inside the barn. Everyone sat at their assigned tables and the wedding party came in and lined up in front of the head table where the ceremony took place. We provided audio for the ceremony so everyone was still able to hear the vows Kaleisha & Dakota shared with one another.

Because of the rain you would think it would delay us but in fact we were ahead of schedule the whole entire night because originally we were to do a receiving line outside at the ceremony site but because of the rain that didn’t happen. Lucky the rain stopped shortly after the ceremony into the cocktail hour where our wedding party were able to snap a few photos outside.

Because I had a helper with me today I was able to do the wedding party introductions directly from the dance floor where guests had a clear view of me. We used music clips for each couple walking in. From the introductions we went into our first dance. What made this truly unique was the fact that I had given Dakota my microphone right after his introduction with Kaleisha were he would thank all of the guest for coming but then he would walk toward the dance floor and as he was walking toward the dance floor he said “and now I would like to invite my beautiful wife to the dance floor for our 1st dance” and all you got from everyone was a “awwww”

From the first dance to the toasts and afterwards we had something special planned (which you can listen to below) We had cousin’s of Kaleisha that simply couldn’t make it to the wedding because they just moved to China…. So I reached out to them and they recorded a special message… everyone was surprised and shocked. (I know I’m sneaky)

Even though we was ahead of schedule it didn’t matter because even though towards the end when everyone started to clear out and we only had a handful of people everyone just sat outside the barn and enjoyed the weather why I would play the music aloud. It was nice to be able to relax and have everyone enjoy each others company. Check out the videos below of both the ceremony and reception also some photos as well.