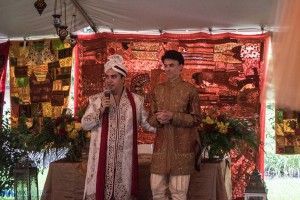 A celebration? Maybe… more upscale than what I thought it was going to be? Yes! I was wow’ed away when working with and seeing everything that Dan & Ron put on for their guests. The simple fact is that Dan & Ron just wanted to have fun and let loose and thats exactly what I believe they did.

I originally meant Dan & Ron at a bridal expo that I was advertising my services in. Dan & Ron immediately starting asking me a bunch of questions in which I was honored to answer…. after all wouldn’t you want to know about the professional you’d be hiring for your special day? Both seemed pretty interested, but it wasn’t for a few weeks after the bridal expo that I heard back from them. Once I made contact with Dan from the form he submitted online via our website I contacted him and discussed some options. I honestly had no idea that what they would be planning would be this detailed…. but you know what? it truly added to my experience as a mobile entertainer.

Dan & Ron expressed some concern that they wanted certain songs to be played, in which I told him about our online music request feature. However, Dan & Ron had something else in mind. They gave me a flash drive at the event filled with their favorite remixes of songs. This was no ordinary party… it was more of a club atmosphere. All of our songs played during the dancing portion of the night was played at 120+ BPM (beats per minute) so if you can imagine if you would everything was upbeat and blended in smoothly.

During the night we also had a special guest singer who did a few karaoke tracks for us in which we pre-planned before our event. We brought out the microphone, the tv screen and even had the lyrics up on the screen. We didn’t want it to turn into a karaoke fest so we just had a few songs sung by him… besides all the guests had plenty of opportunity for fun from all the dancing, to all the food they had… I never seen so much food at an event. They had open bar for all guests and plenty of whatever it was that you might be able to think of. This was no ordinary party! This was a fun night of celebration… a 1,001 nights of celebration. Thanks Dan & Ron for having me be apart of your special celebration. Take a look at some photos below.