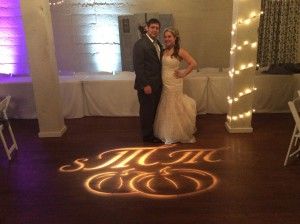 I originally meant Shanelle along with her mother Robyn at the same location as where the wedding would take place “The Cellars At Brookpark Farm” in Lewisburg during a “brides night out” bridal expo that featured many vendors to help plan your wedding. I believe we had a good conversation that night about her wedding. Later during another bridal expo is when I seen them again and the mother had put a “down payment” on our services. Later on we then set a meeting to discuss packaging and plan the production….

When meeting with Shanelle and her mother they had selected a fairly large package with me that would include: Dancing on the clouds, a customized monogram, and full room up-lighting. For this particular up-lighting job I had another person come in and help. We programmed the up lights via DMX software. The nice thing these up-lights are wireless DMX & Battery powered for the main room so when dancing began we could easily change between their wedding colors (purple and silver-ish) to muti-colors that would strobe and chase differently. For the up-lights in the other room where the bar was located we kept those the standard wedding colors that the couple had chosen.

Shortly after choosing a package for our couple the mother had asked to add another service onto the package without our couple knowing. This would be a picture slideshow of them growing up titled “Through the years” that would play during the wedding at some point and would also be put onto a DVD for the couple to have as a gift. I began working with Robyn right away on creating this. We would spend countless nights on the phone going over different ways and ideas on how to create this. We had to roughly scan in about 150 photos, edit, crop and completely make something from scratch.

Speaking of scratch the customized monogram was from scratch also. We originally started with a design from our catalog book but then ended up changing fonts as well as the image to pumpkins which was not listed in the catalog. I love making custom thing and this was one time that I had the opportunity of doing so. The venue allowed for a perfect place to hang our spotlight for the monogram projection as well… win on our end.

We had some traditional activities done such as the bouquet and garter toss but also maybe some non-traditional activities such as for the buffet line. Now you may of heard of me using and playing the random objects game to dismiss tables to the buffet line but not this time. For this wedding we used trivia questions that were about our Bride and Groom Shanelle and Michael. All in all I believe we had a very fun night check out the video and pictures below.


COMING SOON: CHECK BACK LATER FOR THE VIDEO FILE OF THE PICTURE SLIDESHOW.