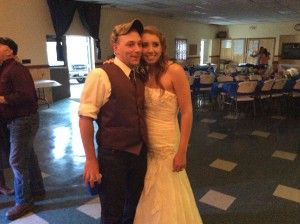 I absolutely loved working with this wedding couple. A lot of behind the scenes work took place to make this wedding such a success: From the love story to the special dance Justine did with her mother, everything was custom tailored the way they wanted it…I meant with Travis & Justine sometime last year and we went over what all I could offer. We also made mention of a “love story” in which they opted they would want this service for their wedding. What is a love story you ask? This is where a lot of time took place behind the scenes. We filmed Travis & Justine at separate times asking them questions about how they came to be, what life was like before they meant and other similar questions in which we edited down and put on film.  (you can check out their video love story below)

Into the planning process I received an email from Justine asking if she could do a special dance with her mother that required a lot of editing and production on my end. It was a dance… but not just any dance but a dance of evolution. Now what is a dance of evolution? well its a dance that would start off slow like any traditional wedding slow song/dance but then when you least expect it it would sound like a turntable loosing power and go into multiple songs including: YMCA, cotton eyed joe, dirt off your shoulder, jump on it, and more! just short clips of each song that have there own dance moves.

Upon meeting at the fire hall about a week before the wedding to see how we wanted the love story to pan out and how we wanted things setup we noticed a stage.. now we could of setup on stage but behind that stage was a ugly bingo board and also a soda machine… what a sight for sore eyes when it comes to a wedding so without hesitation I knew it was time to step up my game and I mentioned to Travis & Justine that I would personally go out and buy drape to cover up the mess. This made the room look more “professional and neat” Its the little things that you can do to really turn a room around.

One of my favorite things to do now a days (depending on if it turns out right) is record the wedding toasts made by the best man and or maid/matron of honor (depending on if that person is married or not) so after recording the toasts we took and hand edited it on site using a special program and over-layed the voice during a instrumental (soft) part of a song. while doing this everyone was in a circle with their arms around one another swing and swaying back and fourth. This folks is called adding personalization to a wedding.

While this wedding had a small guest count I believe it was truly unique and fun. Check out all the photos and videos below.