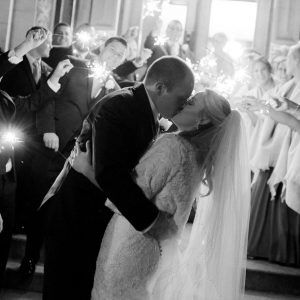 What happens when you take an awesome couple who are getting married and add it to New Year’s Eve? Well one epic celebration of course! If I had to give this wedding one word to describe it, it would be: Lit. That’s right this wedding was on fire. It packed a punch and was seriously a blast.

First off since it was a New Year’s Eve wedding, we didn’t start until later in the evening. The ceremony would be around 5pm with cocktail hour and dinner following… Not your typical time for a wedding but we lasted well into the night.. past midnight when we brought in the new year 2017. So besides celebrating the love and happiness of Ray & Kayla, we also celebrated by taking 2016 out in style and welcoming in 2017 with some class.

Ray & Kayla were a fun couple to work with. We not only did the reception but also provided audio for the wedding ceremony which would take place up in the auditorium, a photobooth (which by the way got super busy and messy), shadow grand entrance for all the wedding party, confetti at midnight, and a live stream of Time Square in New York CIty…. who can you say that can pull all of this off? Not to mention we had a packed dance floor all throughout the night. I had so much “great” footage that I broke it down into 3 videos which can be viewed below. Also take some time to look at a few pictures I was able to capture. Thanks Ray & Kayla for having me apart of your special day. Much Love & Happiness to you both.