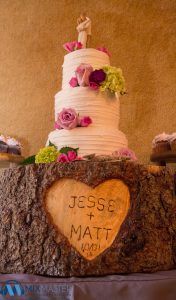 Matt & Jesse’s meant at a young football game that their sons played at and started dating. It was a few years into their relationship that Matt would ask Jesse to marry him. I’m not sure exactly how Jesse found me, but I’m glad I she did and I was able to provide services not only for her and Matt’s reception, but also provide music and audio for their ceremony at a separate location.

Jesse being in the wedding industry herself as a photographer had a basic understanding of how everything would be planned out way beforehand. At first I was only to provide services for the reception but soon was asked to also do the music and audio for their ceremony which was held at The Durrwachter Alumni Conference Center. The reception would take place at The Lock Haven Elks Club where we would have the company of some wonderful family and friends.

Music ranged from old to new and we had everyone dancing and having a good time. From the first dance to the last it was a night to remember and celebrate. Thanks to Matt & Jesse for having me apart of their special day! Some photos and video below.