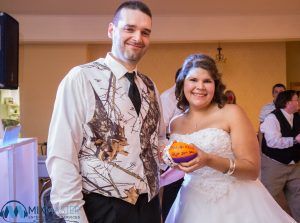 Chad & Shelly’s wedding was a day that was filled with lots of love, fun, dancing and customization. I was able to work with the couple to customize different things within their timeline and make it about them, A personal connection.

For the wedding party we did “teams” …. now what are teams you may ask? Rather than introducing the wedding party as couples I introduced them separately and also gave a little bio about each one so for Chad’s groomsmen I said representing team Chad our groom then introduced them. I also did the same with Shelly’s side. We had lots of dancing from an anniversary dance, to something a tad bit different for your bouquet and garter.

For the Bouquet and Garter we had Shelly stand in the middle of the dance floor and have all the ladies create a big circle around here. We then played music as the ladies went in a circle one way while Shelly went and spun the opposite way… all while being blindfolded. When the music had stopped, whomever Shelly was facing received the bouquet. This is just a tad bit different from what you may normally see such as the toss.

Now for Chad, we kept it traditional with a garter toss however we put a twist on it. I had Chad & Shelly sign a small nerf type football with their names and wedding date. I would then put the garter around the football and Chad would use this for his garter toss. Neat idea right?

All in all it was a good night, with good people and good food. Thanks Chad & Shelly for letting me celebrate with you. Check out the pictures and video below.