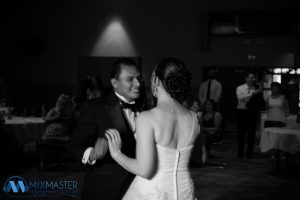 Danielle & Adonay’s wedding took place on a Friday afternoon at St. Joseph The Worker Parish with everything right on site. The ceremony was held in the church and reception followed in The parish hall aka “The big room” This wedding was the first wedding of the very busy September month for us. The ceremony included a full catholic mass and afternoon reception that included a late lunch and some dancing.

Danielle & Adonay starting dating after they found each other online through a catholic dating site from what I remember and was told. They quickly grew their relationship and wanted to get married when they reached out to me for help on entertainment. This was not a normal wedding for me as it was more of a laid back style wedding, I quickly found out that Adonay’s parents would not be in attendance so I scrambled to come up with something heartfelt. Adonay’s parents are not from around here, in fact they live so far away and thus is why they was unable to attend.

After doing some research, I found out that Adonay’s parents who wasn’t able to attend also do not speak english so this was quite hard for me but I had to turn to the bride Danielle for help. This is something I don’t normally do, however she knows Adonay better than what I do. I told her of an idea and she turned me over to Adonay’s brother who also can speak some english and we was able to call on a 3 way call to Adonay’s parents and the brother spoke to his parents on recording a special message for our groom in which I was recording while on the phone. We then played back the special message during the reception. It was very heartfelt.

We had a typical reception. 1st dance, Cake cutting and some dancing. Take a look at the photos below and/or watch the short video clip we got of all the action. Thanks Danielle & Adonay for having me apart of your special day.