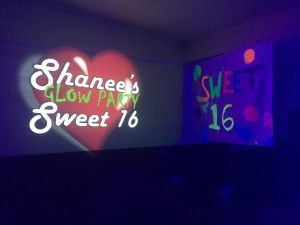 This party is going down in the books as one of the best concepts I’ve done with a Sweet 16 in along time. I had a blast working with Shanee, Her mom and dad to create a super sweet 16 GLOW party. I say GLOW in caps because we did just that. We made it GLOW with UV black lights and fabric hung throughout that had glow in the dark paint that read things like Sweet 16, etc.

I’ve known Shanee’s mom and dad for quite some time now and when Shanee seen me perform for a middle school dance that she attended she told her mom I want him to DJ my sweet 16. I gave a few ideas in which we chatted and came up with the idea of a blacklight party which we would have things glow using glow sticks and other glow in the dark items. Also for the party I custom designed a logo if you will aka monogram that was specifically for Shanee’s party. It had her name along with Sweet 16 glow party written across a heart.

For the party I did a few surprises and ended up playing some music videos and ambient video clips.  We also surprised Shanee with a photo from her childhood we projected up on the wall.

Take a look at the photos and video below. I truly had a blast working with them and hope they had a blast. Thanks for having me.