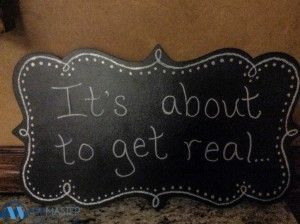 First things first, Becky & Trevor are the realest (realest) Drop this and let the whole world feel it (let ’em feel it). This Downtown Williamsport, PA wedding was totally upbeat and had guests dancing all night long…

I seriously had a blast working with Becky & Trevor. They are fun, upbeat and down to having a good time. I had some great suggestions in which Trevor was open to trying out… but lets take it from the top. Becky & Trevor had one of my more larger packages that featured Dancing on the clouds, uplighting, and a monogram. I also had the pleasure of playing music and providing a wireless microphone for their ceremony that was held just down the hallway in library room of the Holiday Inn.

The reception portion of the wedding took place in the grand ballroom, which was wonderfully up-lit with beautiful fall colors. We used green, orange, and red uplighting all around the room which really took the room to a whole other level. Also for the room as mentioned before we had a customized monogram. The monogram was made to look as though Rebecca and Trevor had carved their initials into a tree with their wedding date.  It read “R&T 9-19-15” of which we sent them the gobo piece used to make this to them as a keepsake after the wedding,

For Becky & Trevor’s entrance into the room we used a song picked by them but quickly as no one was paying attention I passed the microphone over to Trevor (remember how I said Trevor was open to some ideas??) well as they walked to their head table and guests were seated Trevor thanked all his guests for coming to the wedding and then invited his beautiful wife to the dance floor. For their first dance …. they danced on the clouds. Shortly into the song Trevor would pull out of his suit jacked a flower… more importantly a daisy … Rebecca’s favorite flower.

Trevor quickly thought about the things I told him because when it came time to cut the cake, rather than smashing the cake in Becky’s face he very nicely fed her the piece of cake in which you got this great response which is music to my ears… “Awwww” from all the guests. Don’t believe me? just watch the video below.

Non-Stop dancing all night. We had guests singing along and dancing  to the tunes. At one point we had part of the wedding party (I believe it was two groomsmen) who came out and took off their button up shirts (not to worry as they had under shirts on) that read “OMG BECKY” or something along those lines as we played the hit song “Baby got back” by Sir-Mix-Alot. totally a fun and laughable moment for all to enjoy. Check out the video and photos below.

Also a special dance took place toward the end of the night….