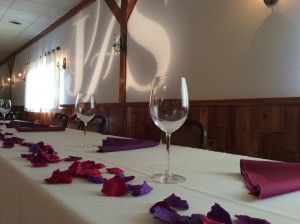 We partied until 12 midnight! What a fun night it was for Jordan & Stephanie for their wedding reception located in Troy, PA We had our photo-booth, a customized monogram, and some activities to make for a fun night…

Leading up to the planning and behind the scenes work Jordan had thought of something special he had wanted to do for Stephanie but was afraid he wouldn’t have time to pull it off, so I had suggestion another thing in which he agreed to doing. We did a custom voice over of his voice that would be embedded into their 1st dance song in which Stephanie had no idea was going to happen. It truly made for an inspiring moment.

For dinner we closed down our photo-booth and had our buffet style “random objects” game. … this time when I asked for one of the random objects (a $5 bill) I kept it for… well… not myself but I gave it to Jordan & Stephanie saying thanks guys you just bought your way to the buffet line… Just random acts of fun.

The photo-booth proved to be a pretty big hit!! guests were saying how much fun it was. We took over 200 photos that night and guest got to keep a 4×6 photo keepsake. The rest of the photos were put onto a disc and sent to Jordan & Stephanie…. along with also their monogram.

For the Monogram we projected each initial (J&S) along with “F” in the middle and the wedding date. This is something I also sent to them after the wedding where they can use it as a decoration around the house.

All in all a great fun night with lots of dancing. Check out the photos and video below.