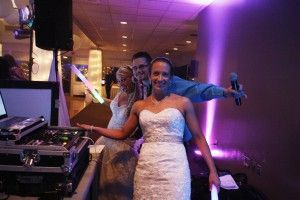 A first for me here at MixMaster Entertainment Services. I recently booked and DJ’d my first same-sex wedding, and what an AMAZING time we had! First off let me start off by saying that I don’t want to bring in any religious views into my blog and as long as these two ladies are happy then let them be… love is love.

Time for a little bit of a history (or what will become history) Lesson. Same-sex marriage has been legally recognized in Pennsylvania since May 20, 2014, when a U.S. federal district court judge ruled that the Commonwealth’s 1996 statutory ban on recognizing same-sex marriage was unconstitutional. (Source: https://en.wikipedia.org/wiki/Same-sex_marriage_in_Pennsylvania)

Now I originally meant Tara & Natalie at the end of July 2014. So we’ve been doing a lot of behind the scenes planning for just under a year. When I meant our couple, if I can remember correctly they told me they originally had a DJ, however that DJ had failed to return phone calls/emails. They had meant with me after seeing me at a local wedding expo in the area. (and I’m sure glad that we meet as working with this couple has been an amazing experience.) Now being same-sex marriage was just passed I told Tara & Natalie flat out that I’ve never had done a same-sex wedding since it was just passed into law.

While not much different from any other regular wedding there was a few things that went into the planning process to make it run so smoothly. After going out to Atlantic City in August for the DJ Times DJ Expo things really began to take place. During the DJ Expo in AC in one of the seminars was a Female Lesbian DJ giving tips on same-sex weddings.  I grabbed her business card and starting chatting with her to make sure what I was doing was the right thing to do. Soon after (after many long nights, days, and well a few months) I finally had custom coded a planning form just for same-sex couples. When you hire MixMaster Entertainment Services all of your planning is done online in this easy to use planning suite.

I believe it was sometime in December where I meant again with Tara & Natalie to present them with this easy to use planning form and asked their thoughts on it. We meant over dinner. Now you may be asking me? I thought you said there is not much of a difference when it comes to same-sex weddings that everyone should be equal? Yes you are correct (well to a certain point) Tara & Natalie are equal and I don’t look at them any different from any other couple however the planning can be slightly difference from a straight wedding. Let me give you an example: For Tara & Natalie for the bridal party we had all females (bridesmaid) and no groomsmen so filling out a planning form that uses the term “groomsmen” would not be appropriate.. not to mention that I’m sure all of the bridesmaids involved were not couples so I suggested we do “teams” as in “team Tara” and “team Natalie” for each group of bridesmaids. and well there is some other slightly different things that go into the planning process but I ensure you that Tara & Natalie are no different from anybody else…. love is love.

Now onto the actual wedding itself. I was hired to provide sound for a separate area for the cocktail hour, uplighting, and reception sound. For the cocktail hour we recently bought some new gear so it was nice to sit down with Tara & Natalie and go over some songs they wanted played for the cocktail hour. I simply put the requested songs on a SD memory card and then plugged it in the back of our remote DJ speaker setup. Yep you heard correctly remote setup. The speaker itself is battery powered and can be setup anywhere.

For the main room we setup aqua & purple(ish) uplighting all around the room. It really make the room stand out. Simply put it looked amazing! For the reception I heard we had some people whom would not make it to the wedding, in which I did some snooping around. (yes I’m a sneaky little person) I found out whom those people were and connected with some of them. I had asked them to say a little something to our couple since they could not make it. I’m not sure what Tara & Natalie was thinking when I played back the phone call right after the toasts but I’m pretty sure they were surprised and shocked. If you want to hear it scroll down as I had taken the time to upload it.

I believe the night went pretty smoothly from the introductions where we did “teams” and then had Tara & Natalie come out to K. West- Gold Digger and having them the sunglasses on and throwing a bunch of fake money. (I can’t wait to see the pictures from the photographer) to the toasts and dinner to cupcakes and dancing it seems everyone had a blast. Take a look at some of the photos as well as video below.

(A special surprise for Tara & Natalie)