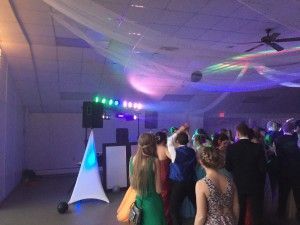 What a fun night this turned out to be! Central Columbia High School held their prom at the Nescopeck TWP social hall on Saturday, May 2nd. The theme for the night was starry nights.

We brought out over 100 glow sticks that we would later throw out into the crowd for fun. Also for this prom we brought out our photobooth which seemed to really be a big hit. Students had the opportunity to grab some friends with some props and quickly get there photo taken in our booth and instantly grab a their photo.

Toward the end of the night we announced the prom court and choice a king and queen all of which hooted and hollered in excitement for them. We played a slow song for them that the court would later join in to with.

Below are a few photos as well as a short video clip that we was able to quickly snap at the events. Students may wish to upload some of their own on social media and have been directly to use hashtag #ccprom15 #centralcolumbia