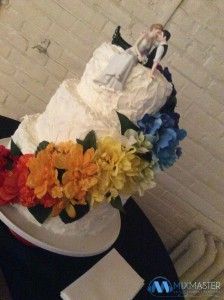 It may have been a rainy day but that didn’t stop Scott and Sarah as well as their many guests from having a fun time. Holding both the wedding ceremony as well as reception in the same location at The Caldwell Consistory in Bloomsburg, PA When I first meant with Scott & Sarah they wanted something simple but different. I gave them some ideas and then they gave me some of their ideas and we came up with some fun things including “themed dinner music” using our online event planner the couple were able to add music that guests requested as well as their own choices using the music request feature. For dinner we had “theme music” ranging from Axel F to Thank you for being a friend from the golden girls tv show.

Scott and Sarah have many friends whom love and care for them. We had people travel from all parts of the world to celebrate with them on pi day (err… their wedding day) We did not have a traditional guest book but rather “Pi sign” that you signed or put your initials on. To help in the memories that would be made today Sarah and Scott had a couch (similar to the F.R.I.E.N.D.S. TV show if you ask me) older style that when being called for dinner that table would have the opportunity to grab a quick photo before heading to the buffet line.

Before dinner we had some very unique toasts made by the matron of honor and best man. Very well played out. We didn’t have any dollar dance or any other things of that nature except a bouquet and guarder toss which even was different from most. We stood Sarah & Scott next to each other one facing one way and one facing the other way with girls on one side and guys on another. We would throw the bouquet and guarder both at the same time to one song. This made it fun and unique.

A lot of other dancing took place all of which was requests by guests before hand or at the wedding itself… I didn’t even have to “read” the crowd, All I had to do was follow the list and guests would be dancing all night. Take a look at some photos I snapped as well as video below.