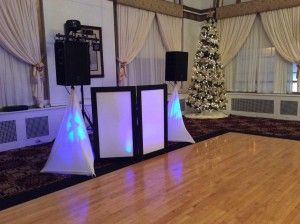 What a fun group of people to entertain for! I think its safe to say they had a blast (and so did I playing for them). I didn’t know we had that many people who worked up in the birthplace at Susquehanna health. It was nice to see the doctors and nurses having a good time.

The event took place inside the grand ballroom of the Genetti Hotel. To match up with the decorations I decided to use some blue uplights behind the speakers to give it a nice little touch.

We had people from all ages up and moving from the buffet line game to dancing the night away what a fun night… there was raffles for prizes and more take a look at some photos and video below.