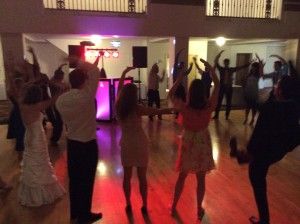 Michael & Tracy’s wedding in the grand ballroom at the Genetti Hotel in Williamsport was truly fun and epic!! There was non-stop energy all night long. time flew right by and before you knew it we had to wrap things up for the night. Tracy and Mike meant when they both attended penn College here in town. They both are very competitive in sports and love to challenge one another…When sitting down with Tracy and Mike during the planning meetings I told them how my services are different and what I could all offer and that’s when they presented me with the idea of hockey during the reception. This is something I never seen done and was wondering what exactly they wanted to do and meant. Tracy and Mike would wear hockey jerseys over top of their formal wear and when they was introduced into the room (with the theme song from jock jams “lets get ready to rumble”) they would immediately go into playing a game of hockey on the dance floor. real sticks where used but the “hockey puck” was simply a soft sponge stress ball so we wouldn’t hurt anybody or anything. 1st one to score got bragging rights.

During the dinner hour things were pretty quite but not for long. As soon as we got dinner over and our 1st dances and cake cutting we opened up the dance floor and things began to get wild and crazy. At one point guests had our groom up in the air! Mixing music in and out time flew right by. The dance floor was packed all night and the energy was unreal. I had to take and give everyone a break by getting our dollar dance and bouquet/guarder toss done.  Before I knew it we had to shortly start wrapping things up. I got everyone in a big circle and shared a special dance with everybody while Tracy and Mike was in the middle everyone put their arms around one another and swayed back and fourth as the music was playing. We recorded the audio during the toasts and then edited it to where it would play certain parts over this song that they would be swaying back and fourth too. This brought the love in the room up a notch and the energy because as soon as we was done with that we ended on a high note.

This wedding was truly fun to be apart and I wish Tracy and Mike many years of happiness. Thanks guys for having us we hope you enjoyed your special day.