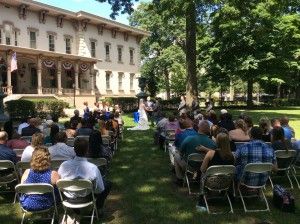 Today we provided music for both the ceremony as well as reception all in one location for this Williamsport wedding. Being held at park place on the corner of West Fourth Street and Campbell Streets this old historic building used to be home of a hotel for guests arriving to the train station that ran right by it. Ben & Lisa are not from directly around this area in fact we had guests coming as far away as Michigan to celebrate with are newlyweds. I never had the opportunity to personally meet Ben or Lisa before the wedding and while I normally don’t recommend this I believe everything went flawlessly and well with the planning we did do via our online planning forms. During the ceremony we played full length songs and more than just your normally maybe 3 songs. This made it worth the money and effort put forth. Also for the ceremony we provided a “hidden” microphone on the groom (well maybe not hidden but it was no handheld and pretty well concealed)  so that guests in attendance could here the vows and prayers being said.

For our reception there may have only been a little dancing but the best dance set had to be between one of our line dances or maybe it was one of the slow songs with all the couples that joined in. Ben & Lisa opted out of doing a bouquet and guarder toss but that is okay because every couple is different. One thing that really makes me different when it comes to providing entertainment is I like to be very personable. Remember how I told you the groom was wearing a “hidden microphone” well not only did that microphone serve a purpose for everyone to be able to hear what was being said but it also recorded their voices which would then be used later in the night over a song. Check out the photos and video below. (as well as the song)