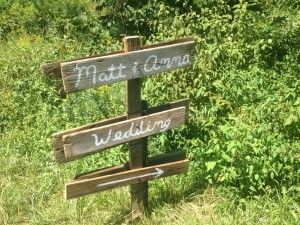 For some wedding events we have to travel which is awesome because I’m always up for a road trip. Anna & Matt planned and put together a awesome wedding that took place just outside of Elysburg at a place called Ponduce Farms.  We arrived extra early as not only was we had an hour drive from out of town but we also provided not only entertainment for the reception but also music for the ceremony. The ceremony was to take place outside of Ponduce Farms just down the hill. I took the time to get everyone lined up perfectly like the bride had wanted and had choose perfect music for when the group of bridesmaids came down the center. Everyone enjoyed and complemented  on how beautiful the music was.  After the ceremony Anna & Matt had their photographer take a huge big group photo from over the hill. Everyone here was family!

Following the ceremony we had a cocktail hour to where guests could mingle around and grab a drink at the bar before we officially had a grand introduction for the newly married couple.  Because the dance floor also served as the buffet line for dinner we went straight into dinner after the toasts. For the buffet line we all played a game with guests to get them to come up to the line called the random objects game… But we had to keep it running fast as of we had a lot of tables.

After dinner Anna shared a special dance with Matt followed by with her father and foster dad as well and then Matt shared a dance with his Mother. We finally then opened up the whole floor to any married couple and soon it was a fully packed floor! We soon released couples back to their seats according to how many years they’ve been married this allowed me to clear the floor for the next activity that we was about to do. We the activities that we did do we spaced them out between different dance sets.  Guests came up and make requests as well as we also played music from a set playlist made by Anna & Matt. Everyone seems to have fun and enjoyed a nice beautiful day. check out the pictures by clicking HERE and video below.